This page contains some links to articles about Hans Urs von Balthasar, the theologian perhaps most known for undermining the Church’s doctrine on hell. The links are further down.

Novel and dangerous Christology. Von Balthasar’s novelties also extended into the realm of Christology. His “Mission Christology” explains the person of Christ in terms of our Lord’s mission from the Father. In an effort to be objective (contra some modern trends in Chrisology), von Balthasar uses modern philosophical language to explain that Christ’s personhood is identical to his mission . In other conscious subjects, personhood has to be achieved by their being given a mission, but in Christ, his Mission is his Person — they are identical — therefore he did not need to “given” personhood as we do. Further, in Christ, we all have the hope of achieving personhood.

The problem with this view is that it defines personhood in terms of “mission,” a philosophical novelty. Rather than being a “rational hypostasis,” a person is a conscious subject which has been put in act (given personhood) from outside. Besides being a strange philosophical psychology, this is dangerous inasmuch as it identifies Christ’s Person with his mission. This would make his mission a necessary, and not a free act. Further, it would make creation necessary and not merely a free act, for the mission presupposes creation. The Logos is a “person” in eternity, yet he had no mission in eternity.

Von Balthasar’s considerations on Holy Saturday, of Christ’s descent into Hell, are perhaps the most problematic. While he presents his theories in erudite, long verbosity, the theologian concludes that Christ on the Cross experienced the abandonment of the damned. Further, his descent into hell was passive, not an active descent into hell (thus, the Creed’s active, “he descended into hell, got it wrong !). Christ experienced the torment of hell and was somehow severed from divine knowledge, a blasphemous notion destructive of faith in the Incarnation and in the Trinity. 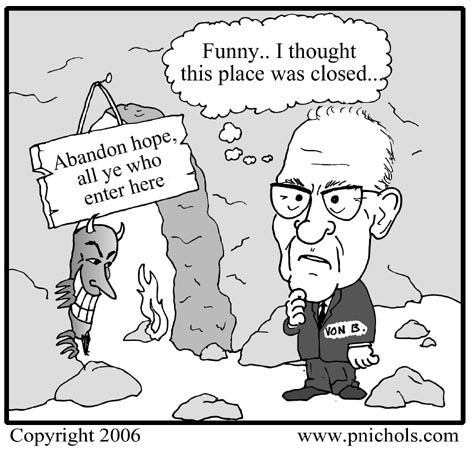 Filed Under: Articles, Current Issues in the Church, Theology

2022 Conference Registration
An Easy Way To Become A Saint
Those Terrible Middle Ages: Debunking the Myths
Dollfuss: An Austrian Patriot
Liberalism A critique of its basic principles and various forms
The Symphony of Truth
Fraternal Charity
De Oratione
The Eightfold Kingdom Within
Visit Our Store