Upon Our elevation to the Apostolic throne, We gladly turned Our mind and energies, and directed all Our thoughts, to the matter of preserving incorrupt the public worship of the Church ; and We have striven, with God’s help, by every means in Our power to achieve that purpose.

Whereas amongst other decrees of the holy Council of Trent, We were charged with revision and re-issue of the sacred books, to wit, the Catechism, the Missal and the Breviary; and whereas We have with God’s consent published a Catechism for the instruction of the faithful and thoroughly revised the Breviary for the due performance of the Divine Office, We next, in order that the Missal and Breviary might be in perfect harmony, as is right and proper (considering that it is altogether fitting that there should be in the Church only one appropriate manner of Psalmody and one sole rite of celebrating Mass), deemed it necessary to give Our immediate attention to what still remained to be done, namely the re-editing of the Missal with the least possible delay. 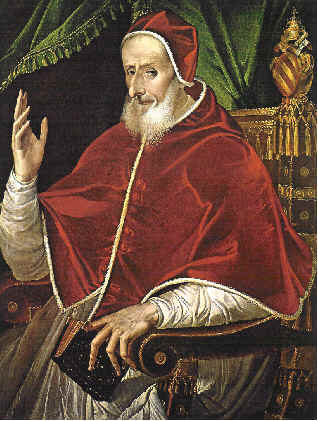 We resolved accordingly to delegate this task to a select committee of scholars; and they, having at every stage of their work and with the utmost care collated the ancient codices in Our Vatican Library and reliable (original or amended) codices from elsewhere, and having also consulted the writing of ancient and approved authors who have bequeathed to us records relating to the said sacred rites, thus restored the Missal itself to the pristine form and rite of the holy Fathers.

When this production had been subjected to close scrutiny and further amended We, after mature consideration, ordered that the final result be forthwith printed and published in Rome, so that all may enjoy the fruit of this labor; that priests may know what prayers to use, and what rites and ceremonies they are to observe henceforward in the celebration of Masses.

Now therefore, in order that all everywhere may adopt and observe what has been delivered to them by the Holy Roman Church, Mother and Mistress of the other churches, it shall be unlawful henceforth and forever throughout the Christian world to sing or to read Masses according to any formula other than that of this Missal published by Us; this ordinance to apply to all churches and chapels, with or without care of souls, patriarchal, collegiate, and parochial, be they secular or belonging to any religious Order, whether of men (including the military Orders) or of women, in which conventual Masses are or ought to be sung aloud in choir or read privately according to the rites and customs of the Roman Church; to apply, moreover, even if the said churches have been in any way exempted, whether by indult of the Apostolic See, by custom, by privilege, or even by oath or Apostolic confirmation, or have their rights and faculties guaranteed to them in any other way whatsoever, saving only those in which the practice of saying Mass differently was granted over 200 years ago simultaneously with the Apostolic See’s institution and confirmation of the church, and those in which there has prevailed a similar custom followed continuously for a period of not less than 200 years; in which cases We in no wise rescind their prerogatives or customs aforesaid. Nevertheless, if this Missal which We have seen fit to publish be more agreeable to these last, We hereby permit them to celebrate Mass according to its rite, subject to the consent of their bishop or prelate, and of their whole Chapter, all else to the contrary notwithstanding. All other churches aforesaid are hereby denied the use of other missals, which are to be wholly and entirely rejected; and by this present Constitution, which shall have the force of law in perpetuity , We order and enjoin under pain of Our displeasure that nothing be added to Our newly published Missal, nothing omitted therefrom, and nothing whatsoever altered therein.

We specifically command each and every patriarch, administrator and all other persons of whatsoever ecclesiastical dignity, be they even Cardinals of the Holy Roman Church or possessed of any other rank or preeminence, and We order them by virtue of holy obedience to sing or to read the Mass according to the rite and manner and norm herein laid down by Us, and henceforward to discontinue and utterly discard all other rubrics and rites of other missals, howsoever ancient, which they have been accustomed to follow, and not to presume in celebrating Mass to introduce any ceremonies or recite any prayers other than those contained in this Missal.

Furthermore, by these presents and by virtue of Our Apostolic authority We give and grant in perpetuity that for the singing or reading of Mass in any church whatsoever, this Missal may be followed absolutely, without any scruple of conscience or fear of incurring any penalty , judgment or censure, and may be freely and lawfully used.

Nor shall bishops, administrators, canons, chaplains, and other secular priests, or religious of whatsoever Order or by whatsoever title designated, be obliged to celebrate Mass otherwise than enjoined by Us. We likewise order and declare that no one whosoever shall be forced or coerced into altering this Missal and that this present Constitution can never be revoked or modified, but shall for ever remain valid and have the force of law, notwithstanding previous constitutions or edicts of provincial or synodal councils, and notwithstanding the usage of the churches aforesaid, established by very long and even immemorial prescription, saving only usage of more than 200 years.

Consequently it is Our will, and by the same authority We decree, that one month after publication of this Our constitution and Missal, priests of the Roman Curia shall be obliged to sing or to read the Mass in accordance therewith; others south of the Alps, after three months; those who live beyond the Alps, after six months or as soon as the Missal becomes available for purchase.

Furthermore, in order that the said Missal may be preserved incorrupt and kept free from defects and errors, the penalty for non-observance in the case of all printers resident in territory directly or indirectly subject to Ourselves and the Holy Roman Church shall be forfeiture of their books and a fine of 100 gold ducats payable by that very fact to the Apostolic Treasury. In the case of those resident in other parts of the world, it shall be automatical excommunication and other penalties at Our discretion; and by Our Apostolic authority and the tenor of these presents, We also decree that they must not dare or presume either to print or to publish or to sell, or in any way to take delivery of such books without Our approval and consent, or without express permission of the Apostolic Commissary in the said parts appointed by Us for that purpose. Each of the said printers must receive from the aforementioned Commissary a standard Missal to serve as an exemplar and agree faithfully therewith, varying in no wise from the first impression printed in Rome.

But, since it would be difficult for this present Constitution to be transmitted to all parts of the world and to come to the notice of all concerned simultaneously, We direct that it be, as usual, posted and published at the doors of the Basilica of the Prince of Apostles, at those of the Apostolic Chancery, and at the end of the Campo dei Fiori; moreover, We direct that printed copies of the same, signed by a notary public and authenticated with the seal of an ecclesiastical dignitary, shall possess the same unqualified and indubitable validity everywhere and in every country that would attend the display there of Our present text. Accordingly, no one whosoever is permitted to infringe or rashly contravene this notice of Our permission, statute, ordinance, command, direction, grant, indult, declaration, will, decree and prohibition. Should any person venture to do so, let him understand that he will incur the wrath of Almighty God and of the blessed Apostles Peter and Paul.

Given at St. Peter’s, Rome, in the year of Our Lord’s Incarnation one thousand five hundred and seventy, on the fourteenth day of July in the fifth year of Our Pontificate.