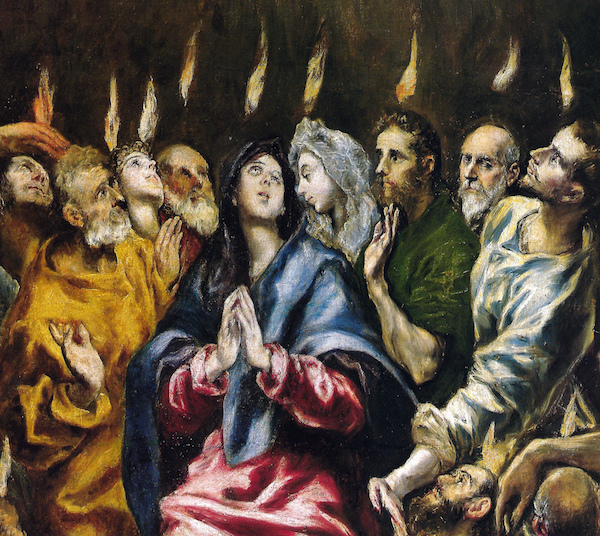 This week’s Reconquest show is called The Mass in the Old Testament. The title is not meant to connote an anachronism: I am well aware that the Mass was instituted on that first Holy Thursday, the night before Our Lord suffered His Passion. In invoking the Old Testament, I am speaking about types and prophecies that pointed to the future reality of the Holy Sacrifice of the Mass.

In general, a prophecy is any supernatural revelation teaching us some divine truth that is not naturally knowable. The prophets are men used by God to teach us such truths, which are about Him and His economy of salvation. In a more narrow sense, prophecy may have the additional quality of forecasting or predicting an event ahead of time. In this narrower sense, the Mass was prophesied in the Old Testament just as other New Testament realities were. Further down, I will speak of one Old Testament prophecy of the Holy Mass, after first considering some types of the Mass.

In his sublime Eucharistic sequence, the Lauda Sion, Saint Thomas Aquinas refers to such types when he writes that the Eucharist was:

Shown in Isaac’s dedication,
in the Manna’s preparation,
in the Paschal immolation,
in old types pre-signified.
(Click here to listen to the whole sequence.)

Here, we see that Abraham’s sacrifice of Isaac, the manna in the desert, and the Paschal Lamb all prefigure the Holy Mass, which is both a Eucharistic Sacrifice and a Eucharistic Banquet.

Isaac was the son of the “Good Father” (Abram) whose name was changed by God to “Father of a Multitude” (Abraham). That son of a father carried the wood for his sacrifice up a mountain where he would be immolated. The parallels between the sacrifice of Isaac and that of Jesus Christ are striking — as are the contrasts.

The Paschal lamb was that sacrificial victim offered up on the eve of Israel’s delivery from the bondage of Egypt. The blood of this spotless victim was put on the doorposts of the Israelites — in cruciform fashion, some commentators say, foreshadowing the Holy Cross — in order to make the Angel of Death “pass over” the houses of God’s people. The Israelites were preserved from death and delivered by this victim’s blood, as Christians are redeemed and saved by the Blood of Christ.

Another type of the Eucharist — specifically, as sacrificial — is the offering of Melchidesich, the “priest of the most high God”: I mean his gifts of “bread and wine” (Gen. 14:18). This mysterious character, who blessed Abraham after the Battle of the Vale of Siddim, is mentioned by King David in a Messianic Psalm: “The Lord hath sworn, and he will not repent: Thou art a priest for ever according to the order of Melchisedech” (Ps. 109 [110]:4). In his Epistle to the Hebrews, chapters five to (especially) seven, Saint Paul comments extensively on Melchidesich as a type of Christ, and on the priesthood of Christ as the priesthood “according to the order of Melchisedech.”

Let it not be missed that what Melchisedech offered was the very matter of the Holy Eucharist. In an amazing sermon, Saint Ambrose gives us the Catholic doctrine of the Eucharistic Sacrifice in terms of Melchisedech and his offering:

Melchisedech was also a priest, as Christ is a priest; to Whom it was said: Thou art a priest for ever according to the order of Melchisedech (Ps. cix. 4). Who therefore is the author of the sacraments if not the Lord Jesus? These sacraments have come down from heaven; from whence all counsel comes. It was a truly great and divine miracle that God should rain manna from heaven on His people; and that the people should eat though they did not work.

But perhaps you will say: My bread is ordinary bread. On the contrary, this bread is bread only before the words of the sacred rite. When the consecration has been added, from being bread it becomes the Body of Christ. Let us therefore prove this. How can that which is bread be the Body of Christ? By consecration. Consecration by what words; by whose words? Those of the Lord Jesus. For all the other words which are said previous to this are said by the priest: the praises that are offered to God, the prayer that is offered for the congregation, for rulers, and for others. But when the moment comes to consecrate the venerable sacrament, the priest will no longer use his own words, but will use the words of Christ. It is therefore the Word of Christ that consecrates this sacrament. …

If then there is such power in the Word of the Lord Jesus, so that the things that were not by It began to be, how much the more can It change what is into another thing?

He says something similar about the consecration of the wine. Then, he repeatedly refers to the consecrated species as the Body and Blood of Christ, as here:

The entire short sermon is worth reading. Other Fathers have employed this same imagery to explain the Holy Mass. Consult, for instance this article by Father Hugh Barbour, O.Praem., to read a Melchisedech-Eucharist passage by Saint Cyprian of Carthage dating from the year 253.

About the mid fifth century, B.C., the last prophet of the Old Testament, Malachias (Malachi), uttered this prophecy of the Mass:

According to I. Shawn McElhinney, “The Didache §14 (c. 80 AD), 1 Clement §44 (c. 95 AD), Justin Martyr’s Dialogue with Trypho the Jew §41 (c. 155 AD), and Irenaeus of Lyons’ Against Heresies, 4:17:5 (c. 180 AD) are a few examples in the first 150 years of the Church from the Apostolic Fathers which recognized the connection between the pure offering [“clean oblation” in our Douay version] of the Son of God at Mass and the prophecy of Malachi (referring to the Eucharist specifically as both a sacrifice and as the Body and Blood of Our Lord Jesus Christ).”

Nicholas Gulda has collected a few of these passages, and in addition, this one, from Saint Augustine, who directs himself to Jews who do not accept Christ as the Messiah:

“‘From the rising of the sun even to its setting My name is great among the Gentiles, and in every place sacrifice is offered to my name, a clean oblation; for My name is great among the Gentiles,’ says the Lord Almighty.” What do you answer to that? Open your eyes at last, then, any time, and see, from the rising of the sun to its setting, the Sacrifice of Christians is offered, not in one place only, as was established with you Jews, but everywhere; and not to just any god at all, but to Him who foretold it, the God of Israel. . . . Not in one place, as was prescribed for you in the earthly Jerusalem, but in every place, even in Jerusalem herself. Not according to the order of Aaron, but according to the order of Melchisedech.” (Sermon Against the Jews)

Was not Christ immolated once in Himself, and nevertheless under the sacrament He is immolated for the people not only on every Paschal Feast Day, but even every day, and is it not also the case that he does not err at all who, when asked, responds that He is so immolated? (Letter 98, 9; A.D. 410).

Recognize in this bread what hung on the cross, and in this chalice what flowed from His side whatever was in many and varied ways announced beforehand in the sacrifices of the Old Testament pertains to this one sacrifice which is revealed in the New Testament. (Sermon 3, 2; circa A.D. 410).

Note how Saint Augustine ties in the “clean oblation” of Malachias to the “order of Melchisedech,” admirably illustrating the Catholic doctrine of the Mass from the Old Testament. Type and prophecy are here joined.

Filed Under: «Ad Rem» A Fortnightly Email Message from the Prior, Apologetics, Catechesis and Fundamentals, Mass and the Liturgy, Sacraments